`Abdu’l-Bahá* is the name by which Bahá’u’lláh’s son and appointed successor, Abbas Effendi, is commonly known. `Abdu’l-Bahá means “Servant of Baha.” In 1892 He was designated by Bahá’u’lláh as the “Center of the Covenant” toward whom all Bahá’ís should turn, the authorized interpreter of His father’s writings and the perfect exemplar of Bahá’í life.     Read More

“On the same spring evening that Mulla Husayn had first found the Bab in Shiraz – May 23, 1844 – a healthy boy with dark hair and blue eyes was born in Tehran. His parents named him ‘Abbas, which means “Lion.” When he grew up he would take the name ‘Abdu’l-Bahá. . . .

. . . . .At twenty-six ‘Abdu’l-Bahá moved with the graceful strength and energy of a young lion . . .  People thought he was tall when they looked at him, though he was only of medium height, for they could not help but see something of his greatness of spirit – a strength of will, a power of mind, a deep love and compassion for others that reached far beyond the ordinary. . . .
-The Story of Baha’u’llah


The film Exemplar highlights His life and its impact. 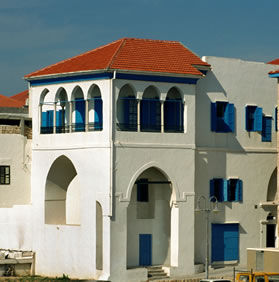 (the Master) and the “Mystery of God.” His story is a natural part of The Story of Baha’u’llah. Chapters 55, 56, 62, 68, 69 especially focus on the adult life and qualities of ‘Abdu’l-Bahá, His relationship to Baha’u’llah, and His station in the Baha’i Faith.


*Chapter 55: The Governor and the Master of Acre
Baha’u’llah leaves task of meeting public to ‘Abdu’l-Bahá. Qualities of ‘Abdu’l-Bahá. People call Him “Father of the Poor,” “Master of Acre.”
*Chapter 56: Two Birds of the Nest of Thy Love
‘Abdu’l-Bahá at age twenty-eight marries Munirih Khanum; her story.


*Chapter 62: The Master
‘Abdu’l-Bahá in Acre: assists poor; meets with leaders of Acre; “Lord of Generosity;” His humility approaching Bahji; responsibilities for Baha’u’llah;
love between father and son.

*Chapter 68: The Sun of Bahá has Set
Baha’u’llah’s passing and ‘Abdu’l-Bahá’s deep sorrow.
*Chapter 69: An Excellent and Priceless Heritage
‘Abdu’l-Bahá appointed Center of Covenant by Baha’u’llah in His Will and Testament.    ‘Abdu’l-Bahá writes to Baha’is of the world.
view complete outline page

For ‘Abdu’l-Bahá, a day in Acre began at early morning tea with the family. The children loved this timewith their father. He would chant prayers and tell them stories about the holy ones – about Christ and His mother, about Muhammad, Moses, and the other Prophets. When he was ready, ‘Abdu’l-Baha would take his leave and walk across the street to the biruni – a large room he had rented for receiving visitors. There he began the day’s work.

Looking out their windows, the children would soon see a crowd begin to gather. People were coming to request help from the Master. Some brought matters of injustice: A man might be falsely accused of wrongdoing, a woman beaten by her husband, or a child mistreated. With each one, ‘Abdu’l-Bahá would send a person to the courthouse to speak to the judge and appeal for justice on behalf of the one in need.

The sick of Acre, too, received ‘Abdu’l-Bahá’s loving attention. The city had no hospital, and it was ‘Abdu’l-Bahá who paid a doctor to care for the very poor. Each day ‘Abdu’l-Bahá sent a servant to look in on those who were ill and inquire about their needs.

Just as often it was ‘Abdu’l-Bahá himself who took the time to visit. In one month he made twenty visits to a poor, elderly couple who were too ill to get out of their bed. ‘Abdu’l-Bahá attended to all their needs.

Among those who came to see ‘Abdu’l-Baha was a woman named Na’um, who was poor and handicapped. Every week she came to visit, and every week ‘Abdu’l-Baha gave her a small gift of money. One day a man ran to ‘Abdu’l-Baha with news of her. “Oh! Master, that poor Na’um has measles!” he said. ”She is lying by the hot room of the Hamman (public bath); everybody is keeping away from her. What can be done about her?”

‘Abdu’l-Baha quickly took action. He found a room for the sick woman and gave his own bedding to make her comfortable. He sent a doctor to see her and found a woman to take care of her. He sent food and made sure Na’um had everything she needed, but she did not recover. Because of ‘Abdu’l-Baha’s kindness, however, her last days were peaceful. When she died, ‘Abdu’l-Baha arranged and paid for her simple funeral.

The leaders of Acre gathered, too, at the biruni of ‘Abdu’l-Bahá. Shaykhs and officials of the court brought their most challenging problems to him, certain that the Master could help sort throught their complexities and arrive at the best answers.

The governor brought newspapers with reports of current affairs in nations near and far. Sitting in the biruni and sipping cups of strong coffee, the governor and other guests would talk over the news of the day. On every topic they valued the comments of ‘Abdu’l-Bahá, whose explanations and insights added much to the content of their discussions.

Admirers sent gifts of sweets, cakes, and fruits to ‘Abdu’l-Bahá. These he took to the biruni to share with all who came. Arabs in the region called ‘Abdu’l-Bahá the “Lord of Generosity,” and he became the standard by which others were praised. When someone was hospitable and generous, people would say of that person, “His house is like the Biruni, the home of ‘Abbas Effendi.”

So passed the days of the Master. From early morning to late in the evening, ‘Abdu’l-Bahá served the people of Acre. In Tehran and Baghdad the poor had called Baha’u’llah “Father” for His tender care, and many had come to seek His counsel. Now in Acre it was ‘Abdu’l-Baha who walked in the footsteps of his father. He neglected nothing except his own rest and food.

A Centenary Note to Reader

1912–2012 A Centenary Note: In 1912, at the age of sixty-eight,‘ Abdu’l-Bahá journeyed to America. Over the course of nine months He spoke to several thousand people and met with countless individuals. Accompany ‘Abdu’l-Bahá on His journey at this Baha’i Centenary site. Although it falls outside the time of The Story of Baha’u’llah, I include it here for its timely interest.

‘Abdu’l-Baha in America 1912-2012: Calling America to its Spiritual Destiny

“Blessed, doubly blessed, is the ground which His footsteps have trodden,” wrote Baha’u’llah, “the eye that hath been cheered by the beauty of His countenance, the ear that hath been honoured by hearkening to His call, the heart that hath tasted the sweetness of His love, the breast that hath dilated through His remembrance, the pen that hath voiced His praise, the scroll that hath borne the testimony of His writings.” 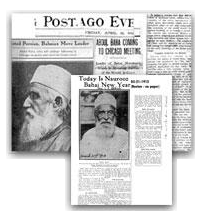